January of 2018 is a month I’ll never forget and in particular Saturday, the 28th. My mother called and notified me that she was diagnosed with Non-Hodgkin Lymphoma (NHL) earlier that month shortly after her 70th birthday.  After months of grueling radiation she hit remission however it was short-lived.  On my birthday in October I received a call that changed my world. My mother changed, my family changed, and I changed.  She was diagnosed with a rare form of lymphoma called Mantle Cell Lymphoma (MCL) stage four and for her it is incurable since it will always come back.  Recently she has been deemed in ‘remission’ and is about to start a chemotherapy maintenance drug to keep the cancer at bay and hopefully it shall extend the years she has with us free of pain.

As a Registered Dietitian everything was tested for me.  I no longer felt motivated to help people since I felt helpless with my own mother.  I became bicoastal to help my parents whether it was to simply be a distraction with laughs or to navigate the muddy medical terminology world. She endured several setbacks and hospitalizations which tested her resolve but she fought and she’s never looked more beautiful to me.

This past April I left my thriving career in San Francisco, California to come to Melbourne, Florida where my parents reside.  The world works in mysterious ways.

For several months my mother has followed a ‘neutropenic‘ diet.  This is basically a diet of sterilized food otherwise known as a way to limit the amount of bacteria in the diet which is necessary with immunocompromised individuals.  Many including my mother think of this way of eating as ‘bland’ and ‘downright awful.’ Foods to be withheld on a neutropenic diet include: certain canned foods, undercooked meats, raw foods (fruits, vegetables, oats, and nuts), protein powders, unpasteurized dairy products, and much more.

Mother’s Day this year was not to be impacted and so I decided to come up with a menu of foods that were tasty but followed the right protocols since she was feverish. Due to her lack of an immune system going out in public was out of the question due to fear of catching the average cold which would be much worse for her.  The menu included: grilled lobster and shrimp, corn on the cob, my special favorite of all time aka the Goat Cheese Spiked Brussels minus the butternut squash, and this delicious cooked caprese salad (so yum x 100).  This was definitely by far was my favorite Mother’s Day with her for so many reasons.

In a basic caprese recipe the tomatoes and basil are raw but in my version it was cooked.  This allowed my mother to eat one of her favorite recipes that she hadn’t had in months.  Sometimes all it takes is some creativity and proper cooking techniques to have mouthful of flavor.

Since late November I’ve been on a series of adventures which included a drive from Texas to California.  I survived the drive and honestly have a new appreciation for road trips especially those that include utilization of an RV (genius idea).  I think the key to any successful road trip is movement, food, hydration, and whomever you are with.  My trip spanned five days and each day was a new adventure.  The only one who didn’t really enjoy the road trip was my poor pup, Theodore Roosevelt III aka Teddy (#TRIIIthecav).

Day 1: Drove straight from the Alamo (San Antonio, Texas) to Santa Fe, New Mexico with a stop in Roswell to find aliens (failed but did find McDonalds), Day 2: Flagstaff, Arizona and dropped my pup off then went to see the Grand Canyon for sunset, Day 3: Phoenix, Arizona where epic friendships were solidified and many laughs were had, Day 4: Oxnard, California with a stop in Hollywood to hike the sign, and Day 5: Drove along route-1 aka the California coast all the way up to San Francisco with multiple photo and hike breaks especially around Big Sur. 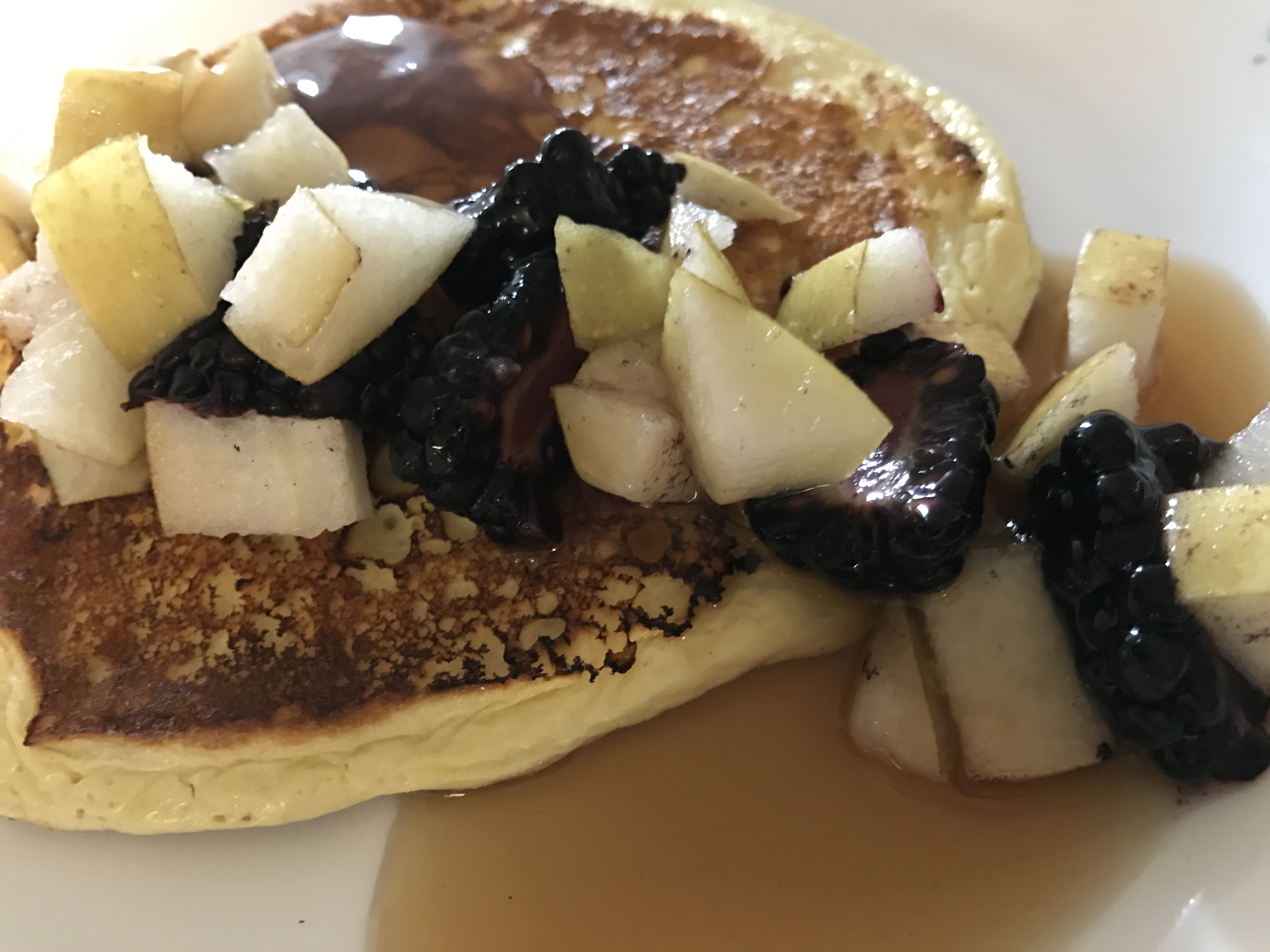 Now I’m settled and back in the kitchen per usual.  I love easy eats and this is a great staple on my weekends for brunch or during the week.  I absolutely love to pre-make these pancakes to have them ready for a ‘grab ‘n go’ type of post workout item or snack especially since they’re a great source of protein which helps maintain satiety.

Threw together a cool topping for the pancakes which included apple pears which are the new super fruit in my opinion.  They’re loaded with fiber, vitamins (specifically C and K), and minerals.  Therefore, if you have yet to try apple pears, just do it.